In March 2012, Attorney General Kamala Harris, the chief law enforcement officer for the people of California, and her Bureau of Medi-Cal Fraud and Elder Abuse (BMFEA) reopened a closed criminal investigation and belatedly charged two licensed nurses, Donna Darlene Palmer and Rebecca LeAn Smith, with felony elder abuse four years after the March 2008 death of a 77-year-old woman, Johnnie Esco, in nursing home El Dorado Care Center in Placerville, California. However, Attorney General Harris and BMFEA, which is headed by its director, Mark Geiger, and its chief of prosecutions, Mark Zahner, filed elder abuse charges against the nurses, but not the nursing home, only after the Sacramento Bee’s embarrassing September 2011 exposé on the the Esco case, on the widespread falsification of patient records in California nursing homes, and on the case’s rejection by the BMFEA and El Dorado County district attorney. The Sacramento Bee‘s March 16, 2012 “Nurses Face Felony Charges in Death of Cameron Park Man’s Wife,” by Marjie Lundstrom, chronicled the four-year crusade of the victim’s 81-year-old widower, Don Esco, who “made hundreds of phone calls and personal visits to local, state and federal authorities to get someone held accountable.” (Photo (right) credit: Office of Attorney General)

Elder Abuse Exposed.com exposes to the light of day the following disturbing secrets about many California law enforcement agencies and prosecutors: 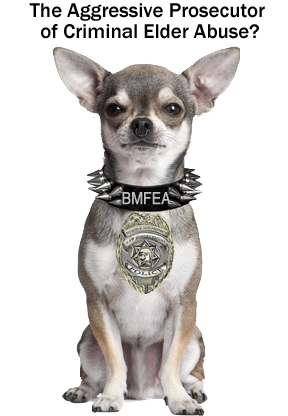